Intestinal Candida can seem to quite often ‘sneak up’ on the sufferer, and by the time one realizes that they have something wrong with them, it’s often grown to a point that’s very difficult to treat with general home remedies. Candidiasis is quite often associated with issues involving only women, but it is almost just as often that men will, at one point or another in their lives, be struck by a Candida related issue.

The species Candida albicans has been noted to be the most common form of this fungal organism to afflict humans. As long as it remains at a steady and controllable level within the G.I. tract, there is usually no cause for concern. It will be the case, however, that if the Candida organism begins to overgrow rapidly, a person may develop signs and symptoms of Candidiasis in his or her body.

Is there a specific range of intestinal Candida symptoms? Unfortunately, most of the initial signs or symptoms are nonspecific and generalized in nature. Because of this, it might be that a physician or other health professional will miss an initial diagnosis of intestinal Candida overgrowth.

For purposes of clarity, it is possible that a Candida intestinal overgrowth will manifest itself through the presence of these following symptoms:

An overall feeling of ill health

If the Candida albicans organism spreads from the G.I. tract, it’s possible that more complicated conditions may result. For women, the most common medical condition that develop Candidiasis vaginitis.

In men, who tend not to suffer as greatly or as often from Candidiasis, there will usually be some sort of skin rash or even infection on the head of the penis as well as minor puss-like discharge. This is often called a male Candida infection. 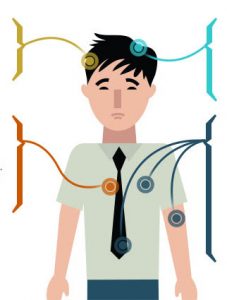 Intestinal yeast infection issues that move into other areas of the body, are usually known as a systemic Candida infection. It’s unfortunate, but Candida in the intestines has been with us for far longer than we know and will be with us for a long time to come. In Candida albicans, as long as it doesn’t reach critical levels of overgrowth,there’s usually nothing to worry about.

Are there any effective intestinal Candida treatment programs if a case of Candida overgrowth occurs? The most common form of treatment consists of taking certain types of antifungal drugs as well as following an strict anti Candida diet which avoids all forms of sugar and complex carbohydrates for a short period of time.

Eliminating sugar from the diet will effectively starve the Candida organism of it’s #1 food source. Additionally, taking probiotics daily will help to replenish your body of much needed friendly bacteria which is responsible for keeping yeast cells in check. Restore 3 is an enzyme and probiotic blend that will help effectively rid your system of candida.

Certainly, a non systemic, intestinal Candida infection can be dealt with through the intelligent application of medications, proper diet and teamwork, undertaken by both the patient and his or her health professional in ensuring that a future recurrence of the Candida albicans overgrowth doesn’t happen.