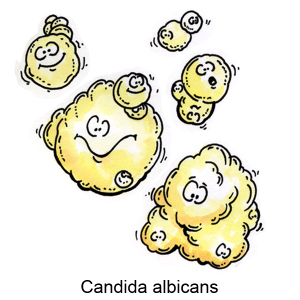 Everyone has a type of fungi, known as Candida, which is present in their digestive tract, throat and mouth. This is normal, and it plays a part in the health of the body. Normally this fungi is kept from growing and proliferating throughout the body by the immune system.

When does this happen?

When a yeast overgrowth occurs, the yeast can take on a different form and go into other parts of the body. A common problem known as Leaky Gut Syndrome, occurs when the yeast creates deep roots into the lining of the intestinal tract, allowing it to go into the bloodstream.

The blood transports this yeast to other organs of the body where it begins to give off some of its 70 toxins. Chronic Candida is actually a very common issue that not many people realize they have.

Candida symptoms are many and they differ from person to person. The person may present symptoms such as learning difficulties, athlete’s foot, muscle weakness, poor memory, depression, dizziness, mood swings, strong cravings for sweets, bloating, abdominal gas and chronic exhaustion. According to some scientists, Candida infections can play an important role in mental health and other major illnesses.

Candida and the Brain 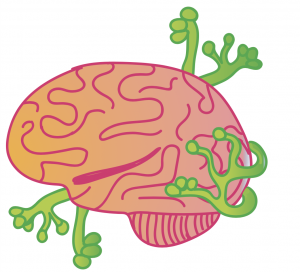 Scientists have yet to discover the reason why, but a Candida albicans fungus overgrowth seems to prefer the organ of the brain over other organs in the body. This may be the connection with mental illness. One of the main symptoms is a patient’s difficulty in thinking and “foggy headedness”.

Treating Candida overgrowth can be done with supplements and a proper diet. It is necessary to start out slowly in order to avoid the Herxheimer reaction.

This is when the body’s immune system begins to kick in and it reacts adversely to large amounts of dead Candida cells, causing the patient to experience flu-like symptoms and to feel very sick. This can be avoided to a large extent by starting Candida treatments slowly. However, it is also a positive sign that treatment is actually working.

The diet for treating Candida is made up of clean meats, plain yogurt, protein and non-starchy vegetables. Yogurt helps the natural bacteria in the intestines to flourish, making it possible for the immune system to control the Candida.

Things that cannot be eaten until the yeast is under control are: sugar, foods made from yeast, fruits and carbohydrates. Sugar is the number one food of Candida yeast and must be avoided if you are on a treatment program. A comprehensive protocol can be found here: Restore 3.

Caprylic acid, garlic and acidophilus supplements are an important part of treatment. These supplements help the beneficial bacteria grow in the intestines, while destroying the Candida yeast. They have been proven to help the immune system stop a Candida albicans fungus overgrowth dead in it’s tracks.

Candida yeast sometimes does positive things for the body. For instance, it can consume foreign bacteria and is considered to play a small part in our defense system against dangerous bacteria in the intestine.

People are often sickly and frustrated because they can’t find help from their doctor and don’t know what is causing their suffering. This is a common situation for many who suffer from Candida albicans fungus overgrowth. If that happens to you, ask your doctor to check for Candidiasis so that you can start treating yourself immediately.