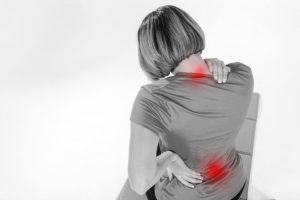 Fibromyalgia syndrome is a chronic illness that affects the entire body. According to scientists, over 5 million individuals in the United States develop fibromyalgia.

Although the condition can affect men and children, it is more common among women. The majority of patients with the illness are diagnosed in their forties.

Every action might become more challenging as fibromyalgia aches flare-up. Everyone experiences flares differently, and different triggers may exist depending on the individual.

However, fibromyalgia is not a progressive condition, which means it will not worsen with time. It also has no negative effects on your joints, muscles, or organs.

Fibromyalgia, often mistaken as myofascial pain syndrome a symptom of chronic pain affects muscles and soft tissues throughout the body and it can also cause irritable bowel syndrome, chronic fatigue syndrome neuropathic pain, and skin pain, pain in the spinal cord.

This is a permanent (chronic) condition. It can affect the neck, shoulders, back, chest, hips, buttocks, arms, and legs.

Although multiple studies have established that fibromyalgia is not an autoimmune illness (like rheumatoid arthritis, in which the body destroys healthy tissues), trustworthy research agrees that this disorder weakens your immune system by generating a variety of anomalies and irregularities.

Fibromyalgia has no known cure. Medication and lifestyle modifications, on the other hand, can help treat fibromyalgia and minimize the probability of flares. Symptoms in the morning and evening can be stronger. Fibromyalgia is a treatable ailment that allows patients to live a normal life.

The degree of the pain varies depending on the time of day and your activity level. Some individuals get it worse in the morning or after exercising.

The kind and degree of fibromyalgia pain can also be affected by stress, a lack of sleep, and the weather. Participating in regular exercise is one of the most effective methods to avoid fibromyalgia flares and manage pain.

Are There Seven Stages in Fibromyalgia?

How Quickly Does Fibromyalgia Syndrome Progress?

Fibromyalgia is not typically considered a progressive condition, but it can worsen with time in some circumstances. It is, however, not a condition with a predetermined course.

Some patients discover effective therapies that significantly lessen the intensity of their flares while also making them fewer and further between.

Researchers discovered that fibromyalgia was more than three times more likely among those later diagnosed with MS.

What Are the 18 Tender Points for Fibromyalgia?

Tender points are painful locations surrounding your joints that are not the joints themselves. When you press on them, it hurts. Even pressure from a finger, such as a poke, can cause a person to grimace or flinch.

Fibromyalgia Tender points in the body are often symmetrical. They are seen both above and below the waist, around the neck, chest, shoulders, hips, and knees.

When the doctor presses on the painful place with enough force to make their fingernails white, it should create pain in that particular region. It should feel painful in the particular location that is being pushed.

The 18 tender points of fibromyalgia are:

– The edge of the upper chest.

– Arm near the elbow.

-Skull base of the back of the head.

The Root Cause of Fibromyalgia

Fibromyalgia is often caused by stressful events such as physical and emotional (psychological) stress.

The possible triggers for this disease are:

-There is an operation.

-Have an abusive relationship.

-Death of a loved one.

However, in some cases, fibromyalgia may not develop after an overt trigger.

Walking, biking, swimming, and water aerobics are all suggested activities for those with fibromyalgia. Maintaining proper posture, stretching, and relaxation activities may also be beneficial.

It is advised that patients with fibromyalgia begin with easy activity, such as walking, and gradually increase endurance and intensity.

Resistance and strength training can help with muscular strength, physical handicap, depression, and overall quality of life. They can also help persons with fibromyalgia improve their fatigue, function, and mood.

Fibromyalgia affects the whole body and can cause permanent problems with muscles and joints. Therefore, patients turn to massage as a natural pain management technique.

Massage can relax the muscles and loosen the joints, so it is very effective in relieving the symptoms associated with fibromyalgia. Other useful effects of massage are:

– Free from symptoms of anxiety, stress, and extreme tiredness.

The Newest Treatment for Fibromyalgia

One of the most promising treatments for fibromyalgia is in the area of biofilm disruption.

The problem happens when there is an overgrowth of these harmful bacteria and yeast, which creates a critical mass of toxins that these bugs release. Biofilm is also known as LPS (lipopolysaccharides) and they are responsible for a multitude of symptoms, including: Body pain, fatigue, brain fog, sleep and mood disorders and digestive issues.

The other thing about biofilms are they are almost impossible for our immune cells and antibiotics to penetrate.

This is where the use of systemic enzymes come into play. Systemic enzymes are useful for so many things, and biofilm disruption just happens to be another use for these enzymes.

They are able to dissolve the tough biofilm walls to expose the harmful bacteria and yeast. Once exposed, our immune system has no trouble eradicating any overgrowth going on.

For more details on how enzymes are working in the fight against fibromyalgia and other chronic diseases, you can visit this page: https://nativeformulas.com/biofilm-protocol

Does an MRI Show Fibromyalgia?

A study undertaken by researchers at the University of Colorado discovered something distinctive in the brains of persons suffering from fibromyalgia. They used a functional MRI, a sort of scan that allowed them to monitor and map brain activity while applying painful pressure to the patients.

During the test, they observed a sequence of patterns in brain activity related to the patient’s pain sensitivity. People who do not have fibromyalgia do not have these brain patterns.

While additional study is required, this result is encouraging for fibromyalgia patients. This means that an MRI might aid in both the diagnosis of fibromyalgia and the identification of the particular patient’s specific subtype of the condition. This degree of data may aid doctors in developing more personalized treatment strategies for their fibromyalgia patients.